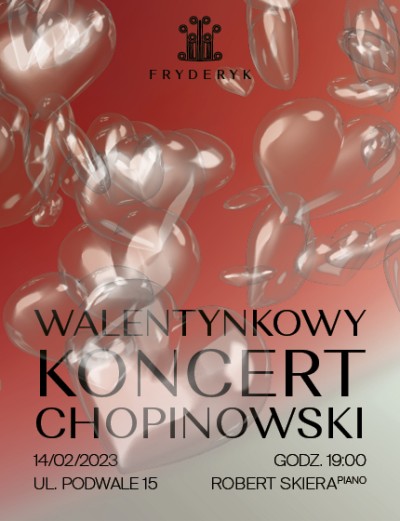 We invite you to our Fryderyk Concert Hall for a Valentine’s Day Chopin Concert, 14th of February at 7 P.M.

The pianist will talk about the composers, their works and the women who inspired their creation.

And all this with romantic candles in our beautiful Fryderyk Concert Hall.

During the intermission enjoy a glass of sparkling wine to celebrate this wonderful day!

Robert Skiera (piano) currently performs as a soloist and chamber musician in Poland and throughout Europe. Between performances he fits in teaching at music schools in Warsaw from the Jozef Elsner State College Music School to his old alma-mater the Fryderyk Chopin Academy of Music in Warsaw from where he graduated in 1988.

In addition to the works of the greatest romantic composer of all time, Fryderyk Chopin, there will also be an opportunity to listen to the compositions of Ludwig van Beethoven, whose "For Eliza" and the „Moonlight Sonata”, and Robert Schumann's Dream and Franz Liszt's Love Dream will move tender strings in the hearts of lovers!

The program will primarily include many of Fryderyk Chopin's most famous works: waltzes, Prelude "Rainstorm", Etude "Revolutionary", Polonaise Heroic in A flat major op. 53.