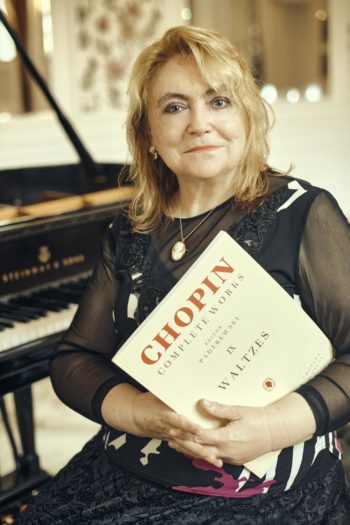 ? We warmly invite you for Chopin Piano Recital performed by Professor Maria Korecka-Soszkowska.

About Her:
Maria Korecka-Soszkowska studied under renowned teachers such as Prof. Henryk Sztompka in Poland and Prof. Dieter Weber in Austria. She has won domestic and international competitions and festivals, among others were, National Competition of Mozart’s Music in Katowice (distinction, 1956), I.J. Paderewski National Piano Competition in Bydgoszcz (2nd prize, 1961), 7th International Competition of Chopin’s Music in Warsaw (honorary diploma for the 2nd stage, 1965), “Moderne Klaviertechnik” in St. Moritz, Switzerland (1st prize). In 1978 she won Jose Miguel Ruiz Morales prize (the only awarded prize for the best interpretation of Spanish music) at the competition Santiago de Compostella in Spain.

Maria Korecka – Soszkowska has given hundreds of concerts and recitals and made recordings for radio, television and general release (7 records including 6 CDs).
She began her pedagogical work in 1967 as a teacher at the State Higher School of Music in Warsaw. From 1988 to 1990 she was a piano professor at Bilkent University in Ankara, Turkey. Since 1992 she has been working at the Grazyna and Kiejstut Bacewicz Academy of Music in Lodz, where she went through all career steps, starting from a senior lecturer to a professor (2000) and a full professor (2006). In 2007 she was appointed to the post of the Head of Piano Chair.

Maria is a member of the Fryderyk Chopin Society in Warsaw and of the Warsaw Music Society, in which she has held the post of Vice President since 2001.