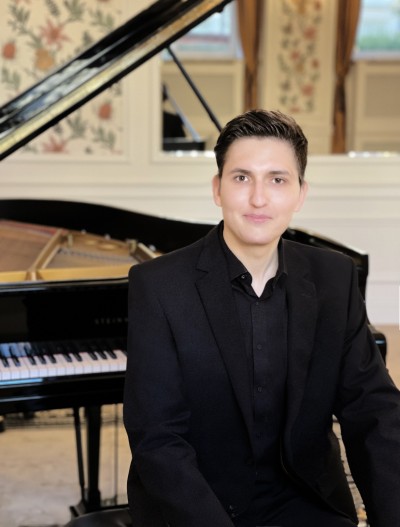 Born on 4 November 1996, he graduted from the Fryderyk Chopin University of Music under Alicja Paleta-Bugaj and Konrad Skolarski and is currently a student in the piano class of Janusz Olejniczak, as well as in the chamber music class of Joanna Maklakiewicz and Mischa Kozłowski. He took part in the master classes of, among others, Eitan Globersonm, Waldemar Wojtal, Waldemar Andrzejewski, Grzegorz Kurzyński, Paweł Zawadzki, Maria Niemira, Tatiana Shevchenko, Petras Geniušas. He has won prizes at Polish and international piano competitions, such as 1st prize in the 1st international, 5th Polish Piano Competition in Turzno or 2nd prize in the Grand Prize Virtuoso International Music Competition in Vienna. He has performed with solo and chamber music concerts in Poland and abroad, among others in the Vienna Philharmonic, within cyclical summer concerts "Chopin en vacances", at the concerts organized by the Chopin Institute in the Fryderyk Chopin Museum in Warsaw to promote young piano talents, in the academic exchange concerts for piano student of Polish music universities, and in chamber music concerts with students from the Fryderyk Chopin University of Music.

Tickets has been sold

Polonaise in A sharp minor op. 53