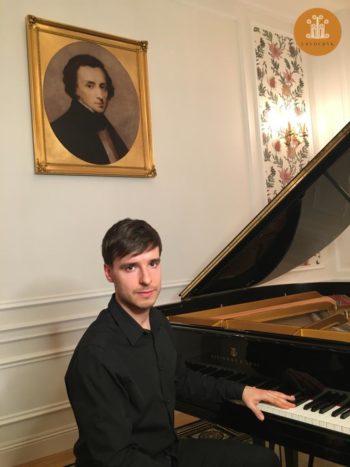 Kamil Borkowski was born in 1991 in Warsaw. His musical education is entirely associated with his hometown: here he graduated with distinction from the 1st Level State Music School of Emil Młynarski and the Secondary General Music School of Zenon Brzewski. His piano development was supervised by Marzena Jasińska, Prof. Alicja Paleta-Bugaj and Prof. Elżbieta Karaś-Krasztel.
He graduated from the Music University of Fryderyk Chopin in Warsaw. He obtained his bachelor’s degree thanks to cooperation with Prof. Jerzy Sterczyński, he completed his master’s studies under the supervision of Prof. Piotr Paleczny.
He improved his skills by taking part in numerous music courses in Poland and abroad, where he worked with such artists as Waldemar Andrzejewski, Philipe Giusiano, Lee-Kum Sing, Krzysztof Jabłoński, Pavel Gililov, Jacques Rouvier, and John Perry.
He has performed in Poland and abroad, performed, among others in Austria, the Benelux countries, Estonia, Finland, Spain, Canada, Germany, Italy, Slovakia, Ukraine, Hungary.
He is a laureate of many awards in Polish and international piano competitions, both solo and chamber.
For his artistic achievements, he received a scholarship from the Minister of Culture and National Heritage (2009).
Buy ticket