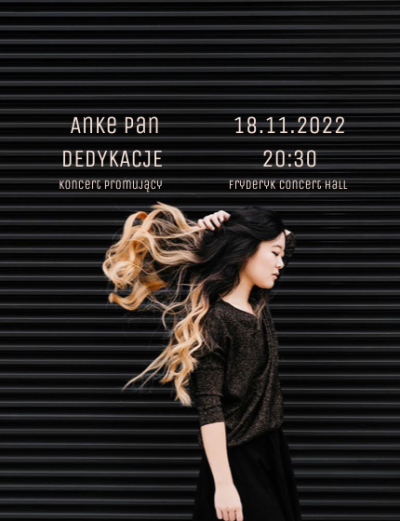 The program of the piano recital will include compositions by Robert Schumann, Ferenc Liszt and Fryderyk Chopin. However, the artist's selection of works is not accidental. Each piece artists devoted to each other as an expression of respect, admiration for art and deep friendship that united them. Despite many differences in the sense of aesthetics and lifestyle, the compositional finesse, extraordinary sensitivity and emotionality present in their music remain elements common to the three composers.

Anke Pan was born on March 31, 1993 in Mülheim an der Ruhr (Germany). She began learning to play the piano at the age of four, and at the age of seven she performed her first piano concert with an orchestra. She studied at Pre-College in Cologne with prof. Pierre-Laurent Aimard. She continued her education under the supervision of prof. Ilji Scheps She received numerous scholarships and appeared in the international media.

The artist has won first prizes at several international piano competitions, incl. Steinway-Klavierspiel-Wettbewerb in Hamburg and Rotary-Wettbewerb in Essen and the "Euro-Asia Festival" in Trossingen. The most recent achievements of the pianist include the Enschede Piano Competition, the Lancaster Romantic Music Competition and the Alion Baltic Festival in Estonia. In 2010, she was the youngest participant and the only representative of Germany at the Chopin Competition in Warsaw.

She has performed, inter alia, in Germany, Switzerland, Liechtenstein, Croatia, Poland and the USA, also playing concerts with orchestras such as the Toruń Symphony Orchestra and Zagreb Soloists.

In 2021 she released her debut album "Storyteller" with the music of Chopin and Ravel, and then in 2022 her second album "Piano Fantasies" and the first recording of the piano duo "Three Suites for two Pianos" by ARS Production.

Anke is a scholarship holder of the "Deutsche Stiftung Musikleben", "Musik und Jugend" from Liechtenstein and the "Rotary-Club" from Aachen.

In 2009, she was awarded the title of "Steinway Young Artist".